​Two mornings are being planned to do some work to tidy up the two Churchyards at Hubberholme.
The main job is the annual cutting of the rough grass areas to the side and back of the Church, but a few other areas will also be tidied up.
The main tools needed will be strimmers and rakes for the grass and loppers for cutting trees and other vegetation back. It is hoped that the Kettlewell strimmer/mower will be available get the grass down.
The proposed dates are Saturday, October 15, and Wednesday, October 19, from 10am to 1pm.
Anyone who thinks they may be coming is asked to let Keith Jeddere-Fisher know by emailing keithjedderefisher@gmail.com so the work can be managed appropriately.

The 2022 Annual Meeting of Parishioners and Annual Parochial Church Meeting (APCM) for the Parish of Upper Wharfedale and Littondale took place by Zoom on Wednesday, April 27. The meetings were chaired by the Vicar, the Rev Tom Lusty.
Jane Way from Buckden and Rebecca Ward-Dooley from Arncliffe were elected as new Church Wardens. Andrew Hitchon was re-elected as a Church Warden. Jackie Yarrow has stood down as a Church Warden but has been elected as a member of the Parochial Church Council (PCC).
Deirdre Halsall has stood down as Senior Sidesperson at Hubberholme and also from the PCC. Hilary Follows has stood down as Senior Sidesperson at Arncliffe and also from the PCC. New team arrangements are being made to cover the work they have been doing at their Churches. Sue Nelson was re-elected as Senior Sidesperson at Kettlewell and Philip Butterfield was re-elected as Senior Sidesperson at Conistone.
Sandie Parsons has stood down as a member of the PCC. Lay members of the PCC who were elected at yesterday’s meeting are Keith Jeddere-Fisher, Judy Burgin and Josephine Foster.
Ex officio PCC members are Pauline Thompson and Patsy Campbell (Lay Readers), Nick Davies (Treasurer), Kathryn Butterfield (Safeguarding Officer), and the Rev Di Blakey Williams (Retired Clergy). The Parish’s representatives on the Skipton Deanery Synod are Jane Way, Caroline Johnston and Sarah Paul.
There are 110 people on the Electoral Roll for the Parish as a whole, of whom 86 are residents and 24 are non-residents. 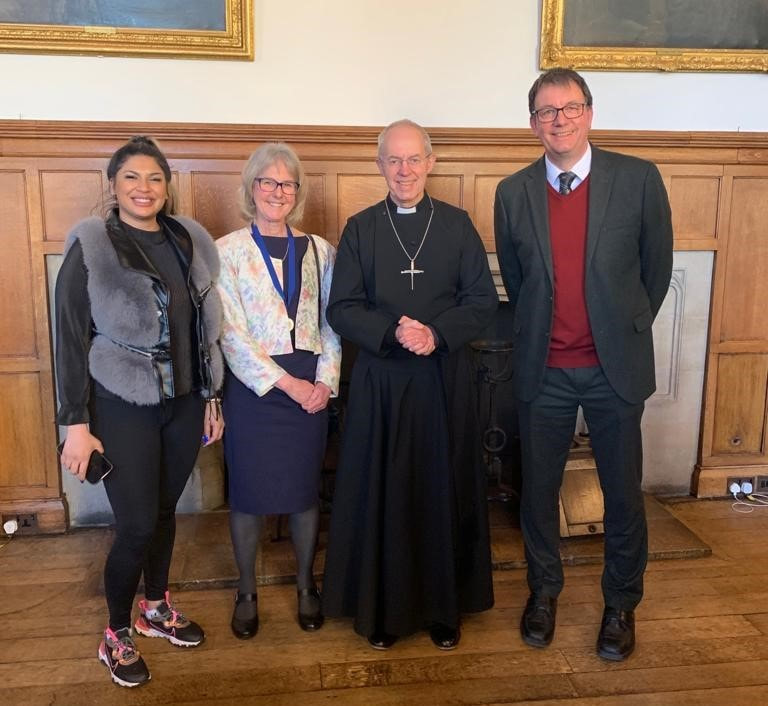 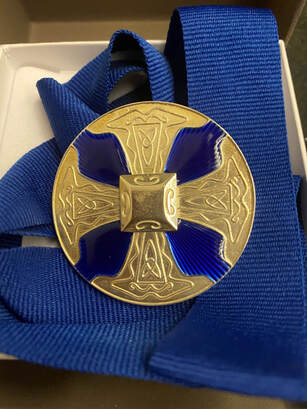 ONE of our Parishioners has received a special award from the Archbishop of Canterbury for her outstanding work during the Coronavirus pandemic.
Dr Sally Smith, from Arncliffe, was presented with the Cross of St Augustine, one of the highest honours in the Church of England, by the Most Rev Justin Welby in a ceremony on Tuesday (March 8) at Lambeth Palace.
The citation for Sally's award reads as follows:
Dr Sally Smith – The Cross of St Augustine for Services to the Anglican Communion
For outstanding service to support the Communion’s pandemic response, including through the Global Covid-19 Task Force
"Dr Sally Smith has given outstanding service to the Anglican Communion during the pandemic, playing a leading role on the Covid-19 Global Task Force, convened by the Anglican Alliance. The Global Task Force has supported the Anglican family of churches and agencies as they each respond in their own context to this public health crisis, with its related social and economic impacts, especially in the most vulnerable communities. This collaborative work has built on international technical expertise, including Sally’s own expertise in the role of faith in responding to pandemics.
"As part of the Global Task Force, Sally led on shaping a strategic framework on how to support the Communion through the pandemic. This has served to build stronger connections to promote shared learning and access to technical knowledge. Dr Sally’s background working with faith partners through UNAIDS on HIV and the World Health Organisation on Ebola and now Covid-19 have brought key health expertise to inform the Anglican response. Her specific contribution has been to highlight the importance of building a technical response on faith foundations and to analyse how the various structures of the Communion can be resourced to greatest effect in the pandemic response.
"During this period, Sally identified with others the need to connect and mobilise health experts across the Communion. She has worked tirelessly to launch the Anglican Health and Community Network, along with the three Co-Convenors. This included a series of webinars across the Communion on Covid vaccines. In essence, Sally has served to help build strong technical and faith foundations to the Global Task Force’s work in supporting the Communion’s pandemic response."
Sally received her honour as part of the 2022 Lambeth Awards, which recognised the contributions of 37 recipients across four continents. She was accompanied at the ceremony by her husband, Dr Ian Smith, and their daughter, Anandi.
Afterwards Sally said: “I must say it was a complete surprise, and I am both honoured and humbled by the award as I much prefer to stay invisible and ‘behind the scenes’.
"It was also an honour to receive this award on International Women’s Day - recognising the work of so many women and men over the last two years in the Anglican Alliance, and the Anglican Health and Community Network, including Rev Canon Rachel Carnegie, Dr Janice Tsang, Bishop Michael Beasley, Bishop Luke Pato, and many others.
"Anglicans and people from other faith traditions as well as colleagues in WHO, have supported the engagement of faith partners from all traditions in responses to Covid-19 based on both accurate scientific information and faith. Thanks to such a great crowd of witnesses and hard-working colleagues.”
For the full story on the award, see the May edition of The Link.